I was watching the Golden Globes on Sunday night when this ad came on. I will admit that I was drawn to it and couldn’t take my eyes off the screen. However, I do think I was so mesmerized by the ad because of the children singing. As soon as the ad was done my roommate [A health sciences major] said “There’s no way those are all real. McDonald’s would not say “Pray” on one of their signs”. She said exactly what I was thinking: there’s no way McDonald’s would have their employees crawl on a ladder up to their sign in the middle of a flood and write a pray for us type of message – it is both politically incorrect and beside the point when a town is dealing with a tragedy. While that was my main problem with the ad, internet outrage broke out over some of the other imagery that the signs painted. 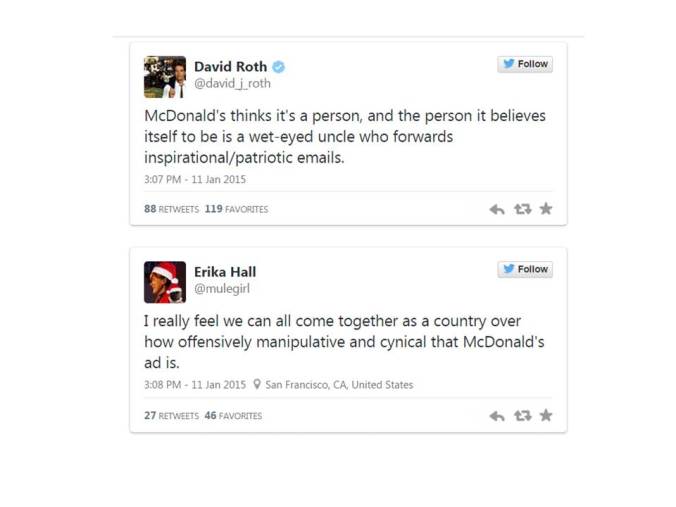 The commercial provoked strong reactions, with some saying they were moved by it and others saying it was tacky for a company to use tragic events to polish its image. Most of the national criticism of this ad was because the signs featured references to 9/11, the Boston Bombing and the Columbia Space Shuttle disaster which people find insensitive.

Recently McDonald’s has been trying to refresh their brand after falling sales the past two years. They have been focusing on the “lovin it” part of their “I’m loving it” slogan. A previous ad in this series was a cartoon ad in which long standing enemies like Batman and the Joker and Bears/Packer fans become friends and love each other. This new Signs ad was meant to illustrate the role that “beloved” McDonald’s restaurants play in communities. I think that McDonald’s trying to humanize their huge corporation is a good thing but they should not be doing it by capitalizing on tragedies that are still very fresh wounds for many Americans. Regardless of what your personal opinion of the ad is, McDonald’s can chalk it up to a win as they are getting tons of free publicity from it because everyone is arguing about it.